Growth spurts are something you become all too acquainted with as a parent. At first, they were awesome. But after two years of swiping my debit card for kiddie wardrobes, “Yay! He’s out of preemie clothes!” became “Whoa, I just bought him new shoes TWO MONTHS AGO!” Six years in, I’ve learned to anticipate the all-new-everything trips to Target, so it’s not as painful as it once was. But just when I thought I’d made peace with “the spurts”, parenthood threw me a change-up I was ill-equipped to hit. 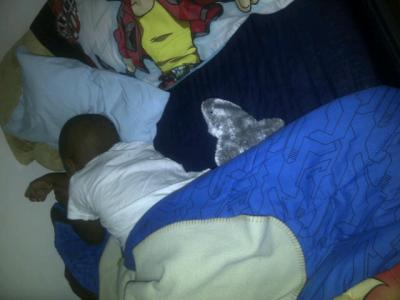 Sharks and spurts attack from the depths of the unknown. They conspired to do this to me.

Sometime this past year, under the guise of kindergarten, My Boy had his first real maturity spurt without my permission. What’s a maturity spurt, you wonder? Well, a maturity spurt is a growth spurt without the shopping trip, but with more interesting “conversations” about why mommy and daddy don’t live together. Jesus, take the wheel. I was just getting pretty good at parenting my child as he was, then he up and started trying to make sense of things. Who said that was ok?! He has more complicated questions and slightly more annoying opinions and I haven’t yet adjusted to this person that used to be my 5-year-old. But now that I’m less mom-motional about the whole thing, I’ll begin at the beginning.

Clue #2 – First day of summer camp. My Boy didn’t want to hold my hand when we walked in. Say what, now?! He wanted to make an impression on the big kids. So be it. But when did he start caring about his rep?!  I kissed his face so the other kids would see, got in my car and shed a tear for my child’s new rep as a boy who doesn’t hold his mom’s hand anymore. My life.

Clue #3 – The Lost Shirt Debacle. Somewhere between the locker room and the pool, My Boy lost his shirt at summer camp one day. Instead of turning circles for a half-hour, then crying shirtless to a camp counselor like my pre-kindergarten child might have done, he promptly went to the lost and found, picked out what he deemed to be a suitable t-shirt and put it on. Yuck and yay for budding problem-solving skills!

Clue #4 – Speaking of locker rooms, did you know little boys compare their weenis sizes in there?! I didn’t! Apparently, My Boy had one of the larger peni in the 5 to 6-year-old division. Yes, he told me this…in a rather matter-of-fact sort of way too, like “No, I’m serious, Mom. It was the biggest one. We checked.” What do you say to that?!  Five-year-old Boy would have never pulled out his weenis. Right?

Clue #5 – The Question to End All Questions for the Next 20 Years of My Life. “Mom, why can’t you and Dad live in the same house?” Or some variation of that. Sometime this year, My Boy suddenly became aware of our ‘situation’ and he started wondering why we have a ‘situation’ at all. Sometimes confused by it (“But I thought you could only have babies if you were married.”) and sometimes enthused by it (double the rooms, double the toys), My Boy is trying to piece things together. His questions have gotten more complicated and my answers have gotten slightly more detailed, but it’s interesting to watch his process, to watch him sort things out from the answers I give him. But man, that parental guilt is a doozy, ain’t it? Despite how smoothly our co-parenting efforts have played out over the years, his father and I will have to account for our past actions through questions from Our Boy at every stage of his life. I’m drafting talking points.

Even though they make me uneasy and occasionally cause me to question my abilities as a mother, these spurts do us both some good. They challenge me to be a more aware and responsive parent, but they also reveal, with every new shoe size and awkward question, that My Boy…is obviously too damn smart and going to be over 6 ft tall. Jesus, take my car.